Selecting a unique mysterious name is one of the main characteristics of the historiography of Dr. Muhammad Ebrahim Bastani Parizi. These names which are merged with fantasy sometimes misguide the minds of interested researchers particularly those ones who are used to learning about the content of the historical works via their straightforward titles. Without examining Bastani's works through precise principles of the science of history, these researchers consider Bastani Parizi’s historiography as a part of historical fiction. It is while he has done many scholarly studies on the history of Iran.

1. The main road from China to Europe.

2. The road to Peshawar, India, and Kheibar.

4. The branch to Coumadin, Jiroft, and Hormuz.

5. The branch to Shiraz, Estakhr, and Siraf.

6. The road to Mousel, Obbola, and Basrah.

7. The branch to Mecca, Medina, Feniqiya, Syria, and Bab-al-Mandab (pp. 212-213). Therefore, the name Ejdehaya Haftsar (Seven-Headed Dragon) emphasizes the importance of the seven main branches of the Silk Road. He states that the Silk Road was not a narrow route but a widespread road between 32 to 38 degrees North (p. 205).

To examine the reasons for naming this road “the Silk Road” Bastani examines different hypotheses proposed in this regard. One of the critical hypotheses confirmed by Bastani is that “silk” was one of the main commercial goods exchanged throughout this road. He believes that silk in ancient and medieval times was as important as oil in the 19th and 20th centuries and nuclear energy in the future (pp. 207-208). The Chinese who discovered how to make silk prior to other countries tried to conceal the technology of the silk industry from other countries to monopolize its trade. In Bastani’s viewpoint, the construction of the Great Wall of China was not just to resist the permanent invasions of the Mongols but also to conceal the technology of making silk (p. 208). Therefore, the silk exchanged all over the road was monopolized at first by the Chinese people; but later other countries including Iran developed the technology of making silk and so gradually the number of producers and dealers of the industry of silk increased (pp. 203-205).

Besides silk, different animal skins, perfumes, drugs, spices, and tools of warfare (pp. 212-213) were exchanged throughout the Silk Road. Moreover, the trade of slaves was so common in ancient and medieval times, “Slaves from Greece, Spain, Armenia, Georgia, India, China, and Turks were exchanged throughout the Silk Road.  The Markets of Balkh, Bukhara (pp. 353-354) and Taraz, China, and Tibet (p. 400) were the main centers for the trade of slaves.

Besides various goods, art crafts, and customs were exchanged throughout the world. To give an example, the art of music played on delicate silk cords traveled all over the world through the Silk Road, “The art of the musicians was more delicately played on the Silk cords; the reward devoted to the musicians was called Abrisham baha (the price of Silk) (p.417).

Looking for the origins of the word Abrisham, he finds its traces in the Pahlavi and also the Birjand accent of the word in which Las means the sleave silk (p. 207). In this regards the words Kashmir, Kisar, Qiz and Qoz are also related to silk and its trade (pp. 244-246 & 303).

One of the significant topics examined in this website is to determine the specified period of the Iranian medieval time.  Regarding Bastani’s account of the history of the Silk Road, the time from the Arab invasions of Iran to the collapse of the Safavid reign is regarded as the medieval time (pp. 207-208). Considering the realm of the Sassanid Empire (224-651), he specifies the geographical scope of different local dynasties:

How the security of the merchants traveling throughout the Silk Road was retained has critically been explored in Ejdehaya Haftsar, “The Iranian tribes and local rulers were in charge of maintaining the security of the Silk Road. Hence, the caravansaries were constructed to provide not only the facilities for the travelers but they were also equipped with war tools and solid towers to support the lives and goods of travelers (pp. 210-211 & 328).

“The main reason for the Mongol invasion was to dominate all parts of the Silk Road. It seems that the slaughter of the merchants and envoys of Chengiz by Sultan Muhammad ignited the battle between the Mongols and the Khwarazmshah since the Mongols could not tolerate the seizure and confiscation of their properties. Even though the Mongols conquered the Khwarazmshah, they were not satisfied until they could conquer the Ismailis who were constantly robbing the caravans. Therefore, 30 years after the first round of the Mongol attacks, the Mongols who were encouraged by the Muslim wealthy men and the Ulama of different cities subjugated the Ismaili. The Mongols conquered all the Ismaili castles from Utrar to Antakiya including Ghazza, Halab, Hamedan, Alamut, Tabarak, Mihmandust, Robat Sharif, and Ikhtiyar al-Din were conquered by the Mongols. Consequently, the caravans could move with more security along the Silk Road (pp. 257-258).

However, the disintegration of the Mongol empire and the dominance of the Timurids on Transoxiana and Iran cut the relationship between China and Europe (p. 269). Furthermore, the Ottoman Empire ruling on Minor Asia and Eastern Europe including the Balkan countries hindered the relationship between Western Europe and the East including Iran and China. The European countries attempted to penetrate the Ottoman Empire (1299- 1923) via establishing a good relationship with the Aq Qoyunlu and the Safavids in Iran, but the strong dominance of the Ottomans on the Silk Road made the Safavids change the direction of the Silk Road to export their goods particularly their Silk clothes to European countries, “The enduring battles between the Ottomans and the Safavids, especially in Shah Abbas reign, was to establish a new road leading from  Iran to Europe” (p. 272). To find alternative commercial routes, the Portuguese, the Netherlands, and then the Britain navies developed maritime trade in the Persian Gulf and the Indian Ocean. Bastani addresses the long disputes between Iran and India about Qandahar based on the key role of this city in commercial affairs.

Bastani Parizi narrates the history of the Silk Road through the fall of the Safavid Empire to the Afsharid (1736-1796), the Zand (1750-1794), and the Qajar Dynasties. With the establishment of the Suez Canal, the significance of the Silk Road diminished (p. 266).

To conclude, Bastani Parizi addresses the rise and fall of the great Empires through the commercial significance of the Silk Road, “The rise of dynasties is due to the strong wills of commanders and swordsmen wearing hard armors and harsh canvas. And their demise is when they are sitting in big chambers under the light of camphor candles, wearing silk clothes and smelling incense perfumes; Therefore, we can recognize the indirect impact of the “Silk” on the collapse of great Empires” (p. 426). 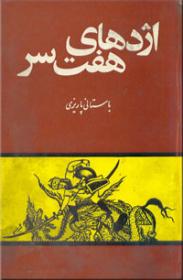