Paucity of Accounts of Daily Life in the Iranian Medieval Times 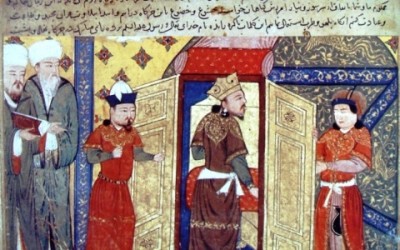 One of the basic problems of doing research on the Iranian Medieval Times is the paucity of detailed accounts of daily life. Regarding the fact that these accounts including itineraries, historical and literary books as well as religious and legal sources constitute the basis of social history, the paucity of reliable accounts will lead to fundamental difficulties in doing scholarly research.

However, based on these limited accounts some researchers have done scholarly studies about the medieval daily life in Iran. Daily Life in the Mongol Empire by George Lane is one of these scholarly studies that provide an overview of social life in the Mongol Empire including Iran and China.[1]  The content of the book consists of the following chapters:

The First Chapter: Historical Overview, Chinggis Khan, and Mongol Rule summarize the processes the Chinggis and his successors went through to establish the largest contiguous land empire.  It briefly indicates the Mongol invasions of China and Iran out of which the emergence of the Yuan dynasty (1271-1368) of greater China and the Il-Khanid dynasty (1256-1335) of greater Iran are enumerated as “the two greatest achievements of the house of Chinggis” (p. 10).

Steppe Life examines “the nature and structure of steppe society and the transformation that Eurasian tribal society underwent during the rule of the Mongols and Chinggis Khan. It will provide an overview of “the nature of the nomadic tribal society that Chinggis Khan was born into and its relationship with its sedentary neighbors to the earth” (pp. 13-14). It specifies that the primary political power of the Turco-Mongol nomadic tribes lay with the Khan or tribal chief. These tribes living in the vast area referred to as the Eurasian steppes developed a new world order on the basis of two factors of tribal nobility and shaman. These two chapters introduce the overall conditions of the Mongol society to persuade the readers to read the rest of the book.

The next ten chapters namely “Appearance”, “Dwellings”, “The Army, “Health and Medicine”, “Drinking and the Mongols”, “Food, Religion and the Mongols”, “Law and Mongol Rule”, “Women and the Mongols, Folktales from Mongolia” deal with the daily life of Mongols in their vast empire. By taking a look at the titles of the chapters, the reader can perceive which subjects constitute the basic features of social history in general and daily life particularly.

Focusing on the chapter “appearance”, this paper addresses the significance of detailed reports of every daily life in conducting a comprehensive study of social history. In this chapter, Lane addresses the remained elementary and complementary accounts of the Mongol’s appearance including their faces bodies, clothes, luxuries, and fineries.

Friar Carpini, an emissary for Pope Innocent IV, traveled to Mongol Empire in 1245-47 provided one of the most measured reports of the Mongol’s daily life: “His {Carpini} detailed descriptions of the Mongols report that men and women would often be dressed identically and that he had problems telling the sexes apart. They wore Tunics of buckrum, fine linen, or silk, split open on one side and fastened by cords with the material folded back double over the chest. Married women wore full-length tunics opened at the front”.[2]

Likewise, Franciscan Friar William of Rubruck, a papal emissary who to Qaraqorum, the capital of the Mongol Empire in 1245-1247 has also described the Mongol’s appearance very carefully: “William of Rubruck was a close observer of the Mongols and in his report to King Luis IX of France he described not only their habits but their dress as well”.[3] Furthermore, the appearance of Mongols has been described by the Armenian historian Kirakos of Ganjak (1201-1272), a cleric and captive of the Mongols.[4] In this regard, not only does the number of accounts provided by the European travelers exceed the Iranian, Armenian, and Chinese reports, the Europeans are more richly informative.

Lane declares that the importance of dress in Mongol society has just been scholarly taken into considerations: “Cloth and clothing held great symbolic significance for the medieval Mongols even before the days of empire. The great number of Muslim weavers transported to China under the Yuan dynasty attest to the importance textiles and dress continued to occupy in Mongol society” (p.42). Even though the Mongols invaded the civilized territories particularly to seize more pastures and fertile lands, the “need for gold and precious stones, used in the manufacture of the Mongol’s ceremonial dress, was one of the driving forces behind the expansion of the Mongol empire into the settled lands” (p. 48). Living in the Mongol time, Marco Polo has discerned the Mongol’s great interest in having luxurious clothes and so he has described this obsession in his Travels.[5]

Despite all its drastic destructions in social structures, the establishment of the Mongol Empire developed the science of history and so historiography in Iran. At this time, many remarkable historical books were written in Persian. Jama’ al-Tavarikh by Rashid al-Din Fadlohhah (1247-1318), the outstanding vizier of the Ghazan Khan (r. 1295-1304) is one of these historical works reporting not only the political changes but also the daily life such as clothing which constitutes the basis of social history. Rashid al-Din refers to Chinggis Khan’s ambition for his wives and daughters.[6] Besides, the appearance of Mongols was described by some Persian poets such as poet Amir Khosrow (1253-1324) visiting the Mongol prisoners taken by the Muslim armies from Sind.[7]

Regarding the fact that many reports of the Mongols have been prepared by the European travelers, the number of accounts preserved from the Mongol era is much more in comparison with those of pre-Mongol time. The remained accounts, however, do not constitute all the written documents about the Medieval Times. There is no doubt that many documents and accounts have been vanished away because of numerous battles and invasions throughout time; particularly in the conditions that many libraries and archives were burnt because of political and religious motives.

However, the paucity of accounts is just one of the critical problems of doing research on the Medieval Times. Among the remained accounts rarely do we perceive the detailed information of the social conditions of the circumstances taking place. It shows that the Iranian medieval scholars were not professionally taught how to make accounts of the circumstances they were eye witnessing or the places they were visiting. Moreover, these scholars did not report many circumstances because they did not consider these events critical enough to be recorded.

We should take into consideration that on the basis of the Iranian oral system of conveying accounts, many events were orally reported. In other words, the Iranians did rarely write their accounts and so they relied on their memories in recording the events. Moreover, certainly, a medieval scholar had different viewpoints about the significance of events and the method of reporting it. But based on the remained accounts it appears that the medieval European scholars were more professionally aware of the significance of their accounts.

Considering this basic problem, now this question arises in our mind that whether the Iranians researchers have learned enough to make detailed informative accounts of the main circumstances of their life or the places they are visiting; especially today that having accounts of everyday life such as eating, dwelling, and dressing has been recognized as the crucial part of social history. It is true that the technological instruments have facilitated the process of recording the accounts, but these digital accounts including photos, films, and maps are required to be supplied by detailed written accounts of those critical parts of daily life that cannot be recorded by technological facilities but they are significant enough to be reported in a detailed written account as a part of social history.

[3] . Lane, Daily Life in the Mongol Empire, pp. 40-42; William of Rubruck, The Journey of William of Rubruck to the Eastern Parts of the World, 1253-55, trans. From the Latin and ed. with an introductory notice, by William Woodville Rockhill, London: Hakluyt Society, 1990, ch. 6.

[5] . Lane, Daily Life in the Mongol Empire, pp. 48-50; Marco Polo, Complete Yule-Cordier edition of Marco Polo’s Travels by Marco Polo and Rustichello of Pisa, The Project Gutenberg EBook of the Travels of Marco Polo, vols. 1 and 2.