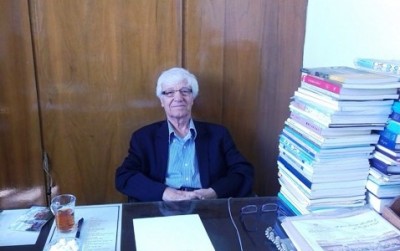 Dr. Ehsan Eshraqi is a prominent professor of History at Tehran University and a permanent member of Farhangestan-e  Olum (Institution of Science). He received his BA degree in History and Geography in 1949 and his MA in History and Sociology in 1963 from Tehran University. In 1970, he received his Ph.D. degree in History from Tehran University. Besides teaching, Dr. Eshraqi has been the dean of the History Department and the director of research projects at Tehran University. Because of his studies on Qazvin, he was honored as a distinguished professor in 2002. “Beihaqi, Tasvirgar-e Zaman” (Beihaqi, the Illustrator of Time), The corrections of “Tarikh-e Jahanaray-e Abbasi” by Mirza Muhammad Tahir Vahid Qazvini, “Tarikh-e Soltani, az Shekh Safi ta Shah Safi” by Hossein Astarabadi, “Kholasa al-Tarikh” by Qazi Ahmad Qomi and the translation of  “Safavi devletinin Kurulusu ve gelismesinde” by Faruk Sumer are some of the scholarly great works done by Dr. Eshraqi.

Professor Eshraqi it is a great pleasure for me to have an interview with you regarding medievalhistory and its geographical history. When is the Iranian medieval time and to which phases do you divide the history of Iran?

Our courses in the history era of Iran dealt with the history of the development of cities and Aryan civilization. Different dynasties were not taught one by one, but two or three dynasties were taught in one course. To give an example, courses contained the Medes and the Achaemenids,  the Saluki and the Parthians, the Sasanians, the Taherids, Saffarids, and the Samanids, the Ghaznavids and the Saljuqs, and the Mongols and the Timurids.

Now, if you want to have your own classification of history, what do you suggest?

I usually do not agree on the classification of the history of Iran into the phases of ancient, medieval, and modern ages. This sort of classification is in accordance with the classification of European history. The history of Europe is classified into Antiquity, Middle, Renaissance, and Modern time. The Middle Ages, orMedieval that is from the 5th to the 15th century, began with thecollapseof theWestern Roman Empire and ended with theRenaissance. This classification is based on the political, social, and economic conditions of Europe and is not consistent with the social and political conditions of Iran.  To my idea, we can classify the Islamic history of Iran as it follows: from the Taherids to the Saffarids, the Samanids to the Ghaznavids, the Saljuqs to the Mongols, the Timurids, The Safavids, the Zand to the Afsharids, the Qajars to the Pahlavis.

You have done much research on the geography of Iran. Which regions do you regard parts of the Iranian historical geography?

As it is being inferred from the concept of geographical history, the geography of Iran has gone through drastic changes throughout history, so we cannot define precise coordinates for it. Based on historical geography, Iran, Afghanistan, Caucasus, Central Asia, Arab countries of the Persian Gulf constitutes different regions of Iran in medieval times.

Nowadays Iran is considered a part of the Middle East and some researchers regard Iran and Afghanistan as a part of Central Asia. To which classification do you believe?

As I mentioned Iran was geographically much wider and it included some parts of Mesopotamia, Central Asia, and the Caucasus. Nowadays, however, Iran is part of the Middle East.

Historical geographically speaking, which subjects do you think ought to be taken into consideration in studying Iranian medieval history?

Besides examining historical events, political, economic, and social affairs, geography ought to be studied. History and geography are two integrated fields of human sciences that have critical impacts on each other. Geographic determinism and its impact on social, economic, political, and even psychological affairs have crucial roles in historical circumstances. Therefore, physiographical factors are required to be taken into consideration.  Moreover, the distribution of population, occupation of people in villages and cities are just some issues of human geography that must be studied. 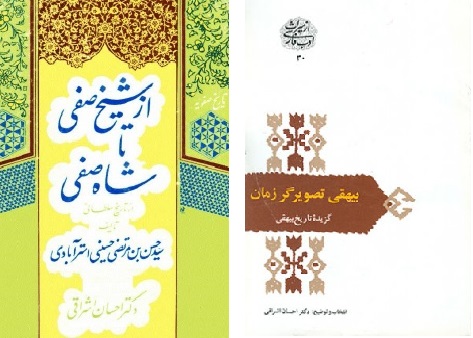