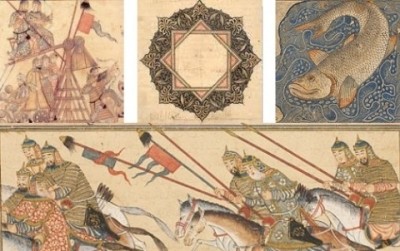 Features folios from the Jami’ al-Tawarikh (or “World History”) of Rashid al-Din (1247-1318) is one of the most important illustrated medieval manuscripts to have survived from either East or West.

The author, Rashid al-Din, was a physician and court historian to the Il-khanid court. Born about 1247 AD into a Jewish family, he converted to Islam and served as vizier (prime minister) to the sultan. He met an unhappy end in 1318 AD, being executed on a charge of poisoning his royal master.

Rashid al-Din wrote what would become one of the world’s most important historical and artistic documents. Jami’ al-Tawarikh converts not only the history of the Mongols, but also that of the Chinese, Franks, and Indians.

The Jami al-Tawarikh was commissioned by Ghazan Khan (1271-1304), begun as a history of the Mongols and their dynasty and then expanded to include history from Adam to Rashid al-Din's present day. It was completed during the reign of Oljeitu (A.D. 1307-16). 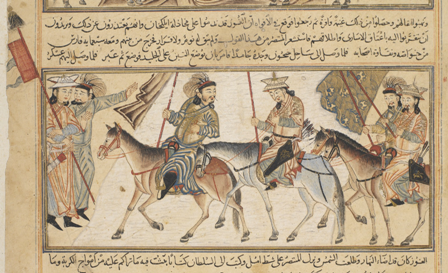 Rashid al-Din had access to information from a now-lost Mongol chronicle for the period of Genghis Khan, and historians find by comparison with material that survives in Chinese sources that he made good use of the source. His treatment of the Il-khanid period is felt to be partisan -- he was himself a high official -- but is still seen as the most useful written source for the dynasty.

Two portions of the surviving encyclopedia, volumes II, and III, are of great importance for the study of the Il-Khanate. Volume II is an account of the successors of Genghis Khan (1206-1227) while Volume III describes the Il-Khans of Iran. In his narration down to the reign of Mongke (1251-59), Juvaini was Rashid al-Din's main source, however, he also utilized numerous now-lost Far Eastern and other sources. The Jami' al-Tawarikh is perhaps the single most comprehensive Persian source on the Mongol period.

Rashid al-Din owned large estates in the Caucasus and Asia Minor. The administration of the state (during 0ljeitu's reign) had become almost a private monopoly of his family: of his fourteen sons, eight were governors of provinces, including the whole of western Iran, Georgia, Iraq, and the greater part of what is now Turkey Situated in the highly international and multi-cultural city of Tabriz in modern-day Iran, the scriptorium of Rashid al-Din welcomed artists from all parts of the Mongol Empire and beyond. Elements of Byzantine, Chinese and other Islamic traditions are all evident in the illustrations. The Jami’ al-Tawarikh manuscript demonstrates a profound fusion of techniques and marks the birth of a new and distinguished style within Iranian painting. 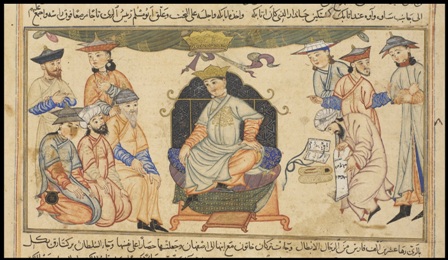 The remained painted manuscripts are as follows:

1.The last portion of Jama’ al-Tawarikh in Persian written in 1316 which is maintained at British Museum.

2.The folio features of Jama’al-Tawarikh in Persian in 1315 which is in private hands in New York.

4. The Persian version is now stored at Istanbul’s Topkapi Palace Library written in  1318.

5. The Arabic version of Jama’ al-Tawarikh written in 1314 whose first portion is at Edinburgh University. It was acquired by Colonel John Baillie (1772–1833) of the East India Company, and together with other Islamic manuscripts, it was passed to Edinburgh University Library in 1876. The other portion was bequeathed to the Royal Asiatic Society and is now in private ownership. This manuscript which is on display has 70 unique paintings is one of the greatest treasures of Edinburgh University Library. The exhibition is free and open to the public from 2 August 2014,  31 October, Monday to Saturday, 10am to 5pm.