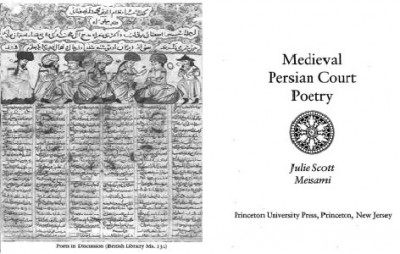 “Persian Medieval Court Poetry” by Julie Scott Meisami introduces the themes and structures of Persian poetry common in the Iranian medieval courts. The poetry of medieval Persia came into being and developed to a high level of artistic excellence under the patronage of the local Iranian dynasties particularly the Samanids and Qaznavids. (p. VII).

The book is arranged in one preface and 7 chapters as follows: 1. Poet and Court in Persia, 2. The Poetry of Praise, The Qasidah and its Uses, 3. Romance: The Language of Experience, 4. Romance: Character as Moral Emblem 5. Romance as Mirror: Allegories of Kingship and Justice, 6. Ghazal: The Ideals of Love and 7. Conclusion: The Art of the Court Poet.

Considering numerous studies done on medieval court literature in the West, the author emphasizes that court patronage is an essential factor in stimulating the composition of many outstanding works of the Western literary tradition (p. VIII). In contrast, we have no equivalent studies of the Persian court poetry and the interaction between the poet and his courtly milieu. The medieval Persian court poetry has been evaluated negatively despite all its significance in genre and structure and so “court patronage has been judged as leading primarily to the composition of fulsome and insincere panegyric characterized stylistically by excessive ornamentation, artificiality, and rhetorical bombast” (p.VII). Therefore, this book contributes a reevaluation of medieval Persian court poetry “by placing it in proper historical and literary perspective” (p. IX).

In the first chapter “Poet and Court in Persia”, she argues that the relationship between court and poet in Iran dates from pre-Islamic times (p. 1). The Abassid caliphate drew heavily on Persian models of court conduct and etiquette (p.5).

The second chapter “The Poetry of Praise, The Qasidah and its Uses” explores Qasidah, the first major genre of Persian court poetry which was at first influenced by Arabic models (p. 40). She emphasizes that no complete study of any aspect of medieval Persian literature can consider it in isolation from the pre-Islamic Iranian tradition, from the Arabic tradition of which it is in large measure a continuation, and from medieval literature as a whole (p.310).

In the chapter “Romance: The Language of Experience” Meisami examines the courtly verse romance which had its distinctive conventions. Moreover, she compares romance and heroism manifested in epic regarding the themes and structures (p.77). The genre of romance is distinguished by the importance it gives to the inner life of its protagonists to reveal the moral qualities of its agents (p. 130).

In the fifth chapter “Romance as Mirror: Allegories of Kingship and Justice” Meisami regards the verse romance dealing with ethical concerns of kingship and justice (p.179). Comparing three romances of Vis u Ramin, Khusraw u Shirin, and the Haft Paykar, she concludes that all these three works do so in the context of the love quest, “but there is a clear progression from the first, where love is the predominant element, through the second, where love and kingship are more or less in balance, to the third, where kingship is the chief preoccupation” (p. 180).

The sixth chapter “Ghazal: The Ideals of Love” introduces Ghazal as an independent poetic genre with distinctive structural characteristics in the twelfth century. Qasidah deals with ethical or topical context while the topic of love serves as a preliminary to panegyric (p.137) Ghazal, on the other hand ultimately eclipsed the qasidah as the most prominent lyric genre. Like romance, the ghazal is a distinctively Persian genre that has no exact counterpart in Arabic.

In the conclusion “The Art of the Court Poet”, Meisami quotes Haft Paykar of Nizami in which constructing poem is compared to the work of a jeweler working with precious stones, Nizami invokes two other likenesses for poet and poem: that of the architect and the edifice he builds, and that of the painter and his paintings (p. 299). More than a mere metaphor of craft, the likeness places the poet in a position parallel to that of the Creator (pp. 300-302). Where Manuchehri boasted of his erudition, Nizami places his poetry not merely on the level of scholarship, but on that of Scripture (p.302).

Comparing Sanai and Hafiz poetry, she stresses that changes in patronage can produce dramatic changes in style and can remove a poet from the category of court poet into another. Moreover patterns of patronage changes in different historical periods with respect to the rise of religious institutions as centers of patronage, and even the influence of an individual patron on a group of poets (p. 313).

Instead of answering questions, Meisami proposes many new problems about the court Persian poetry regarding the relations between court and poet, and particularly on the more mundane aspects of this relationship that ought to be studied, “in the specific area of court poetry, more precise documentation is needed on the type of positions, court poets were likely to hold, the stipends or other rewards they might be expected to receive, the amount of influence they actually exerted, and so on. In addition, there is the question of education: not only that of the poet himself, but that of his audience, the members of the court in which he functioned; the question of the types of literature preferred by individual patrons; and considerable importance for ascertaining the tastes and expectations of the courtly audience” (pp. 311-312).